August – September.  Marvellous Arctic  Blueberries, Currents and Raspberries and the beauty of the Scandinavian landscape during the Summer

It is amazing how a monochrome landscape in the woods can transform overnight into a huge carpet of flowers, seedlings, wild berries and Blueberries. It is a wonderful experience to feel your feet walking on a specialist rake to pick berries soft cushion of Moss and Blueberry seedlings which grow undisturbed here despite the sudden frosts. 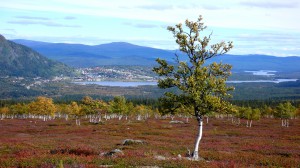 The vegetation is so dense and delicate that it seems as though you are walking in an enchanted world.

August and September are perhaps the driest months of the Summer. The glaciers have completely melted and slowly the water from the winter glaciers seeps into the surrounding area which guarantees the  annual appearance of many plants and berries.

Amongst the berries it is the Blueberry which excels. This very hardy plant – whose berries are available until late October – remains hidden under the first layers of snow and then flourishes in the Summer period.   Blueberries make their appearance in the glades towards the end of July.  Already plush carpets of moss and Cranberries are in evidence, which provide food for a number of small animals who awaken in the Spring, everything begins to flourish thanks to the richness of the undergrowth.  The soil is particularly fertile and rich in calcium carbonate which encourages the growth of a microcosm which you perhaps would not expect to be found in arctic environments.

This is a perfect time of the year for the collecting of Arctic Raspberries. The locals joke about a type of yellow fever which overcomes wild berry pickers, particularly if they collect Raspberries – it is named yellow fever because of the fruit’s golden orange yellow colour – which continue to flourish through the whole summer until September. The locals speak jokingly of a fever that captures the lovers of this berry, particularly the Arctic Raspberries,  its golden yellow colour  is unmistakable in the undergrowth and it continues to thrive throughout the summer until September. A certain euphoria which seems to affect the berry pickers is totally accepted as normal behaviour, as is the competitive spirit between friends who split into teams and try and pick the most berries.

The gathering of the fruit mostly takes place on the huge plateau that dominates the landscape and near the wetlands. The picking of the fruit is great fun although you do have to be careful not to kneel or step on this ‘precious gold’.

Raspberries are also quite expensive to buy at the market. Freshly picked Raspberries cost almost forty euros per kilo. This precious berry can eaten without cooking, although as it is made up of many small seeds it may not be to everyone’s taste, otherwise it is made into jam or it is used as a topping or flavouring for ice cream.

« A Fishing Paradise » In the Realm of Fairies and Gnomes